‘Uncle Peckerhead’ is Gory, Hysterical and the Music is Pretty Catchy Too

Rock n' Roll can be a bloody good time!

Uncle Peckerhead has become one of my favorite horror comedies. This film kicks ass! 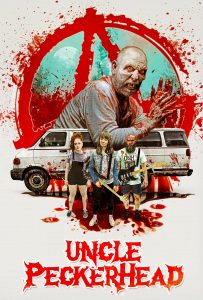 I cannot play an instrument or sing, but I dated a guy in a rock band for many years, was their photographer, and helped sell T-shirts at the shows. I had visions of being the wife of a rock star- but sadly that never happened. So, I can relate to much of the Rock n’ Roll action and frustrations, in this hilarious horror gross-out.

In Uncle Peckerhead we meet the band DUH. The band is made up of a trio of very likable and goofy characters, Judy- lead singer and bass player, (Chet Seigal) Max- the guitarist, (Jeff Riddle) and their snarky drummer Mel. (Ruby McCollister) This punk band has everything going against them. They have no money, their van was repossessed, and they just never catch a break. So, when they get a chance to go on tour- they take it and just need to find a van to get them there. 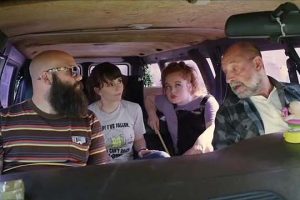 They think their luck has changed when they meet Peckerhead (David Littleton) or Peck as he goes by. An older dude with a great personality, he seems perfect to be their new roadie and driver. Too bad he has one little problem- he turns into a man-eating monster at midnight- something he forgot to tell them before they hit the road. 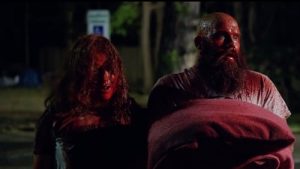 This film was done extremely well and with so much heart. The script is super funny, the acting terrific, the SFX goretastic, (if that’s not a word it should be) and I love, love, loved the music. (Most of it by Jeff Riddle who played Max)

For slasher fans- this film is ultra-violent with some unique and creative deaths, that even includes a spine being pulled out of a body, and some very liquid poop. Campy and laugh-out-loud perfection, Uncle Peckerhead will make you gasp in horror at all the disturbing deaths and then make you dance in your seat to the catchy music. The film is also filled with a bunch of goofy characters they meet on the road. Even smaller characters were written to be remembered. I loved that! 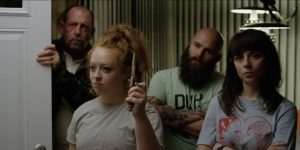 As the tour goes on and the body count rises, the band realizes the problem they have and try to fire their monster buddy. This was not a good idea and the road to stardom, in this case, is paved in blood that takes them all straight to jail, for a while, except of course for Peck, who gets away.

I loved the comradery of the band; it felt so real. This is a film I need to own. I feel like it could be an extraordinarily successful midnight movie when we can get back into movie theaters!

If you have a sensitive stomach, watch with care, but watch this film if you can. Don’t forget to bring a barf bag!

UNCLE PECKERHEAD will be screening in select theaters on Friday, August 7, 2020 and will be available on VOD/Digital on Tuesday, August 11, 2020.