A Book of Colorful Assassins
by Josh Darling June 9, 2022 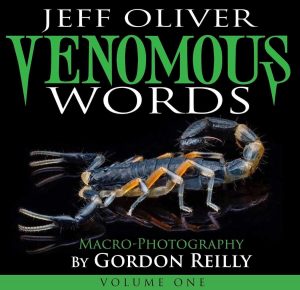 It would be easy to say something catchy and trite about “Venomous Words” the book of photos and poetry by photographer Gordon Reilly and poet Jeff Oliver. Something lame along the lines of “It’s a spooky and creepy book.” That I feel is missing the point. It’s like looking at Marcel Duchamp’s “Fountain,” seeing the urinal signed “R. Mutt,” then saying, “Duchamp’s spelled his name wrong.” The book is a collection of high-resolution photos of insects. Each critter has a poem to match.

The photos border on advertising for entomology. The photos have a personal feel to them. These aren’t awful critters at the ready-to-bite you. These are intimate moments between the deadly venomous and the reader. The bugs are presented allowing them to become their own aesthetic. Blue-eyed spiders, the mating dance of scorpions, the screaming colors of the face of a tiger beetle. 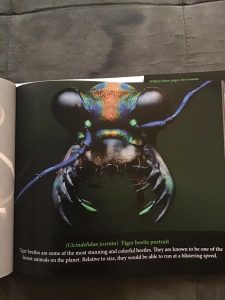 Oliver’s poems span the gamut from off-beat inspirational to humor to darker pieces. Some consist of an awkward meter like a spider missing a leg, but the content of the words makes up for it. There are a few poems in the book that remind me of Jack Kerouac’s American haiku form. Short simple lines that leave lasting impressions. In this case, they’re mostly 2 lines instead of Kerouac’s prescribed 3.

Many of the simpler poems jump off the collection’s pages like a hungry bird spider.

Throughout the book, there are collaborative poems with Xtina Marie, Noe Basurto, Reinaldo Torres, Chris McAuley, David Kempf, Stephen Remillard, and Brandon Scott –whose Vodou book series is one of my favorites, as well as the legendary Joe. R Lansdale. No part of this book is monotonous, but the collaborations add vibrance to the work.
This book is a lush microcosm of alien creatures bringing you into their world through poems and photos. The pages alternate visual and mental stimulation and remind the reader there is a jungle out there. And it’s filled with tiny, colorful assassins. 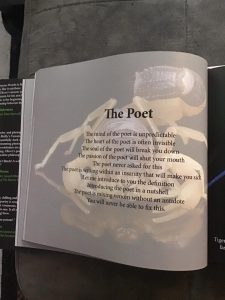