As you may have noticed, I am known as Zombie Girl. As would be expected, I love all things zombie, TV or big screen and not just the obvious shows. For those of you that haven’t followed Syfy’s Z-Nation because it’s campy and silly- well I think you should give it another shot.

I have to admit it is one of my guilty pleasures, and it’s pretty easy to catch up on with Netflix. It’s an unapologetic comedy about the apocalypse, making it fit perfectly in the peg hole for campy. So, if you try to compare Z-Nation to The Walking Dead, it’s like comparing any drama to say, a Ben Stiller movie. That being said though, the last season definitely was grittier and had a few less laugh-at-itself moments as a show, but it’s still a comedy. It is what it is, and it’s a worthy watch just for the laughs, (We all need to laugh, right?) the fun characters and the zombies of course. The creatively horrific (and usually very funny) zombie kills in the show, are something to look forward to and cheer for. Gotta love those zombies, always coming back for more abuse. 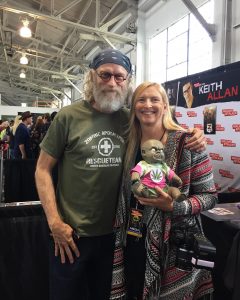 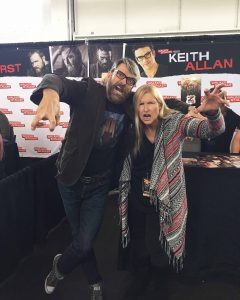 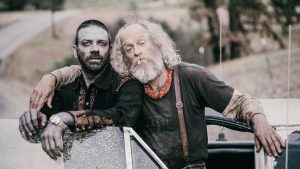 When I was Walker Stalker Con recently, I got to meet a couple of the most fun actors I’ve ever had the chance to talk to. One plays a zombie, one does not. But what they have in common, is this crazy zombie series. At my meeting of said guys, namely Keith Allan who plays Murphy and Russell Hodgkinson, the Z-Weed smoking Doc, I had not been a good zombie and finished watching Season 3 of Z-Nation. I felt bad- so I have binge watched Season 3 and am prepared to be much more knowledgeable about the zombie filled series, and ready for Season 4!

One of the reasons I like the show so much is the genuinely lovable characters, and my favorite of the group is “Doc” the z-weed-smoking, former psychologist turned hippie-doctor, played by Russell Hodgkinson. Enjoy my interview with Russell, who has played Doc for the last 3 seasons. (40 episodes at this writing!)

LAZG: In the last episode of Season 3, aptly titled “Everybody Dies in the End”, did you all die? Is that really what happened?

RH: “That’s what happened, we’re all dead. So now their trying to see who they can afford to have back. It’s a low budget show. But I can’t tell you anything, because then I’d have to kill ya!”

LAZG: Why do you think Z-Nation works so well alongside the other more serious zombie show?

RH: “Well, to begin with, we have a clear-cut mission, it’s not just about survival. We’re trying to save humanity. Each episode has a middle, beginning, and end. We try not to drag things out too long. Our show also puts a little fun in the apocalypse by not taking things too seriously. We take out zombies in some pretty entertaining ways too!”

LAZG: Can you tell me a little bit about Season 3? (Spoilers ahead)

RH: “Murphy escapes from Dr. Merch. We got him to California, to the CDC labs, the submarine blows up- he escapes with 10K, We think, I mean, we didn’t know for sure cause that’s way the cliff hanger from Season 2 worked. But 10K lived, they’re not going to kill off the heart throb, way too much pressure for me, Ha ha”

LAZG: I think you’re much cuter!

RH: “Oh, my god thank you. Anyway, Murphy goes rogue. He goes off on his own, tries to start his own little zombie army, and we’re just trying to find him and get after him. So, in the course of it, me and Addy have some episodes that we do together and Murphy and Warren have some episodes together. Then there’s The Man, the big bald headed mean dude. The Man, he’s from Zona. Zona is the island where the rich people go during the apocalypse, like a Club Med. He’s trying to get Murphy too, so he kidnaps Murphy’s daughter Lucy. So, everybody’s still trying to get The Murphy I guess.”

LAZG: I heard you had a few wild episodes of your own!

RH: “I had some crazy episodes, that I carried. I get laid, it’s a three-way, wait 3 of them and one of me, I guess that’s a four-way. It was intense, can I just tell ya. I’m still sore from that episode! Ha,Ha. I also get hit over the head by an Elvis impersonator, drug off into an insane asylum, and that’s a whole other episode. Doc made back in a big way for Season 3!”

LAZG: So, are you hoping you are back in Season 4?

LAZG: Why do you think Doc is such a popular character?

RH: “I’ve heard Doc called “The Heart of the Show”. He has a good relationship with each of his teammates and is truly their friend. You can rely on Doc, he’s trustworthy and can be counted on to provide a bit of comic relief. He’s always there with the z-weed, or a hug if someone needs it.”

LAZG: As far as the apocalypse goes, do you think Doc has given up on humanity yet?

LAZG: What has been your favorite part of being on the show

RH: “To be an actor. Having a job and getting paid.”

RH: “The garden weasel would be my weapon of choice and yes, I would survive. I’d get a boat, go to an island, smoke some z-weed, I’d be good.”

No promo yet for Season 4- but enjoy the Season 3 trailer. The new season will hopefully air in the Fall of 2017