‘Weird Folk’- A Horror Comedy about Election Night 2016 – You can help make it happen!

Nick Tuturro to join cast! Where were you on election night?

I know there are a lot of movies asking for money to get their stories told. If you are interested in being a part of an indie horror film, who do you choose? I suggest reading all the fundraisers thoroughly, to make sure the movie fits what you want to get out of it.

I’d like to introduce one of the more interesting choices out there. Indie filmmakers, Scott Dunn and Gina Gomez announced they are raising funds via Kickstarter, to begin production on their suburban horror comedy Weird Folk. Just announcing today their excitement that actor Nick Tuturro (Blue Bloods) is joining the cast, Scott and Gina have great plans for this comedy! 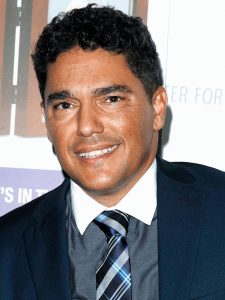 Weird Folk sounds like a lot of fun. The anthology is about the unsettling misadventures of various residents on election night 2016. It is a tale of interwoven stories – A teen, Howie Oden, discovers a terrifying secret about his Dad on the dark web. When Howie scours the neighborhood for him, he encounters a clown stalking the neighborhood, bullies, strange visitors, a chiropractor going through his worst nightmare, dead bodies and a couple who find themselves in the cross hairs of a killer. Just a normal night in the neighborhood, right?

Director Scott Dunn notes, “It’s not really about the government officials who were voted in, but the hysteria of the people who voted for them.”

Producer Gina Gomez added, “Weird Folk is a story that could not be more topical given the current political divide.”

Although Weird Folk takes place on Election Night 2016, it’s not solely about the election. Election 2016 is one of the most divisive elections in American history. A horror comedy set on election night is the inspiration behind the movie. It’s about the horror that humans can inflict on one another. It is about the ugly monster inside us all. The film will show all sides of the political spectrum and does not plan to not skew in any one direction. More importantly, this story is extremely entertaining and will give you some laughs and some chills. Election 2016 was an anomaly and the events that take place in this movie are as well. Last years election was surreal to me and a movie that centers on that time period, has got to be a weird and crazy ride! 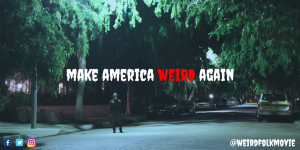 One of the coolest things I love about this campaign is the Snuff Photo contest. Weird Folk producers challenged horror fans to come up with their best snuff photo (need I say, obviously fake?) and send it in, for a chance that the photo will be seen in the film. Pretty awesome, right? Three winners of Weird Folk‘s Snuff Photo Contest will be announced at the launch of the campaign.

Weird Folk is slated to begin production in Los Angeles during August. Director of Photography, Aj Young, is attached to the project. Other than Nick Tuturro as the Chiropractor, the cast and the rest of crew will be announced during the campaign and finalized in June. 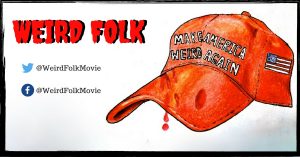 If you’re on the fence about whether or not to contribute, check out the filmmakers’ first film, Schlep, which you can watch for free via their Kickstarter page.

In order to bring their vision to life and make the kind of high quality film horror fans deserve, the filmmakers need to raise $47,000 through their Kickstarter campaign by June 1st. In addition to helping support the future of indie horror, contributors can also pick up some amazing perks. Those who donate as little as $10 get a special thank you in the credits, which is pretty incredible. Higher level donations get digital downloads of the finished film and and lots of other goodies. For those willing to play a larger part in helping this film get made, you can even score a visit to the set or a role as an extra in the movie!