Zombie fans finally have something to GNAW ON with this end of summer feature film!

"Anna...if we don't have hope, what's the point of living?" -Anna's Mother

“Strike the Sun Entertainment and Josh Mendoza have announced the release dates for their newest project, ‘What Still Remains’ to hit theatres this month. Starring some familiar faces like Lulu Antariksa (T@gged), Colin O’Donoghue (Once Upon a Time), Mimi Rogers (The X-files), Dohn Norwood (Hell on Wheels), and Jeff Kober (The Walking Dead).

Mendoza makes his debut on the big screen with a new post-apocalyptic thriller, that takes us into a world ridden by a virus that turns the infected into feral creatures. The story takes place in the year 2024 after the viral infection decimates the majority of the human race; leaving the remaining who still live in fear of the virus and its’ infected. 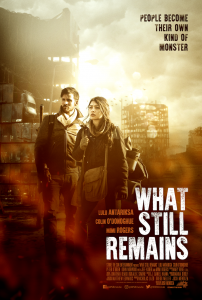 Our story follows a young woman, Anna (Lulu Antariksa) after losing the last of her loved ones. The fight for survival becomes harder to fend alone. Until, she meets a lonesome stranger named Peter (Colin O’Donoghue) who offers her sanctuary in his commune lead by Zack (Jeff Kober) and Judith (Mimi Rogers). With the desire to belong with others like her, she soon realizes that people can become their own kind of monster.

As a fan of good Creature Seekers, I’m very interested on Mendoza’s take on the Zombie apocalypse and bringing out the inner demons that is embedded inside all of us. I feel that this movie will capture the desolation that comes with any End-of-the World story. Every time I watch the trailer so far, has gotten me so ready for Halloween! I honestly can’t wait to review it for all of you! To watch the full official trailer, hit the link the below.